A plan to level up the north

Before there was levelling up, there was the northern powerhouse – an economic vision to rebalance the UK economy, catalyse public and private investment and improve life chances for people growing up in the north of England.

With the levelling up white paper expected in a few weeks, our eight-point plan is aimed at addressing the underlying barriers to productivity: education, devolution, industrial policy, innovation, skills, health, transport, towns and their relationship with cities.

Fundamental change cannot happen overnight. We need sustained commitment from Government to unlock the north’s full economic potential in the long-term, creating better-paid skilled jobs for northern workers. This is the only way to close the north-south divide for good.

Long-term disadvantage is the single biggest root cause of the educational attainment gap between the north and the rest of the country. The pandemic has accentuated this disparity, leaving those without the access to good schooling and digital support falling further behind their better-off peers.

We need to reform Pupil Premium to better target funding for long-term disadvantaged young people by allocating more to pupils eligible for free school meals throughout their schooling, addressing the most entrenched barriers to social mobility.

It is also critical to develop and extend Opportunity Areas to include health and wider determinants of children’s life chances. In this way, partners across the public, private and voluntary sectors can work with schools to tackle the multiple barriers faced by disadvantaged children on a daily basis, delivered in partnership with local and combined authorities.

This government’s policy is to achieve a form of devolution across the whole of the north – whether in the form of Metro Mayors or County Deals. This mirrors the view of the businesses we represent, who have seen the first hand the positive impact that Mayors and other elected local leaders have had in their city regions.

We support plans for devolution in areas including North Yorkshire, Cumbria and the North Bank of the Humber. We would also want to see devolution deals explored in Lancashire, Cheshire and Warrington and the extension of North of Tyne to the south of the river, to also include Gateshead and Sunderland.

Success across the north – from the Tees Valley to Liverpool City Region – has strengthened the case for further devolution of powers, empowering mayors with the full resources for levelling up, such as funding for skills and housing.

There is a real opportunity to create the next generation of jobs while taking advantage of the north’s unique expertise and economic assets to lead our transition to net zero.

This should focus around the opportunity for Carbon Capture Use and Storage (CCUS), hydrogen and Small Modular Reactors (SMRs).

The roll out of any further devolution should be tied to local priorities in the Plan for Growth. Deals for North Yorkshire and the North Bank of Humber should be delivered alongside CCUS and hydrogen production, linking major innovators such as Drax to Teesside and beyond.

In Cumbria, SMRs should be rolled out using the UK’s huge expertise in nuclear and the well-established supply chain (including Sheffield Forgemasters).

In 2015 the Northern Powerhouse Independent Economic Review (NPIER) identified four prime capabilities, in which we compete globally: advanced manufacturing and materials, energy, health innovation and digital. Investment, innovation and collaboration across these sectors would raise productivity and close the persistent north-south divide.

Moreover, in order to capture the full commercial benefits for British businesses, the government’s R&D GDP target must focus on building the UK supply chain.

Backing distinct but complementary innovation clusters across the north could kickstart major economic growth. We must also expand the catapult network (which connects businesses with research and academic communities) across regions based on industry partnerships and clear northern strengths, such as for advanced materials in Greater Manchester. This will help to accelerate innovation diffusion.

The scaled up Made Smarter programme across the north is already catalysing ‘deep digital tech’ adoption in the manufacturing sector, driving up productivity & wage growth.

Lastly, we support the case for the Net Zero North innovation programme by the N8 group of northern universities, focused on areas such as the hydrogen transition and its linked skills programme in partnership with FE colleges.

NPP has convened a powerful coalition of leading northern businesses to focus on transforming the skills agenda for the northern powerhouse. We want to build on the work of businesses working alongside Government, such as the apprenticeship levy introduced by former Chancellor George Osborne.

In order to increase productivity and close the north-south divide, northern businesses require a highly skilled workforce which meets the needs of industry. There has never been a more pressing time to reset the north’s skills agenda and institute wide-ranging, systematic changes to ensure the future prosperity of our businesses, towns, cities, and people. This is vital to a recovery from the pandemic and to the government’s commitment to level up.

Our objective is to restore the number of apprentices in the north to pre-pandemic levels with a higher limit on levels of levy-sharing by large businesses. We want to join up skills planning locally, utilising the existing collaboration between combined authorities and business. By default, skills funding should be spent locally and not via national bureaucracies.

Lastly, we need to address the loss of EU funding, which was vital for helping people into work and which has now been replaced by the Shared Prosperity Fund. While Scotland, Wales, Northern Ireland and Cornwall have all had their funding protected, northern areas such as the Tees Valley and South Yorkshire – which were previously some of the biggest beneficiaries of EU funding – are now losing out.

As we recover from Covid, we have the opportunity to build back our health systems in a way to improve patient outcomes and minimise centralised decision-making.

According to recent data from the NHSA, improving population health would reduce the £4 gap in productivity per-person per-hour between the northern powerhouse and the rest of England by 30% or £1.20 per-person per-hour (generating an additional £13.2 billion in UK GVA).

Health should be improved by addressing entrenched inequalities in least well-off areas to address the overall gap between north and south. Levelling up health outcomes through locally-led integrated health and care services would help close the productivity gap holding the north back.

We are calling for greater integration of services at a local level – this is the right approach for planned NHS reforms to offer patients a better quality of joined up local care. There is already evidence that this approach can have a significant impact on local communities, as has been seen in Greater Manchester.

We need a modern, integrated transport system that forges closer links between northern towns and cities, connecting us to the rest of the country – and beyond.

We compared the Integrated Rail Plan with the investment promised through the full delivery of HS2 and Northern Powerhouse Rail. The government is investing an estimated £36bn less than was originally promised – and most of those cuts are in the north.

While £8.3bn has already been spent on work between London and Birmingham, investment in Northern Powerhouse Rail has been cut by £24.9bn. Meanwhile the original investment promised on the Eastern Leg has been more than halved, a cut of £14.2bn.

This will limit opportunities to grow the labour market and is a huge barrier to replicating the levels of economic success in London and the south east.

Investment in buses and mass transit is also critical – but this should be delivered alongside a new rail line across the Pennines, not as a consolation prize.

Towns are helped – not hindered – by links to nearby cities, according to our most recent report. Levelling up northern towns must focus on helping local people access well-paid, skilled jobs in order to drive up wages and productivity, primarily through devolution to Metro Mayors to invest in transport infrastructure, education and skills, as well as innovation.

Transport connectivity, such as the Metrolink tram in Bury or Goole’s advantageous position on the M62 corridor, plays a vital role in connecting people to job opportunities, while helping businesses to tap into a wider talent pool.

New catapults and wider innovation deals could link assets, such as Newcastle University, with major businesses and investors. In Blyth, the catapult has played a vital role in developing offshore wind. New catapults could help replicate the success of the Advanced Manufacturing Park in Sheffield and Rotherham for major sites such as the Northern Gateway in Greater Manchester.

There needs to be a place-based solution to kickstarting the economy of northern towns that goes beyond physical infrastructure, recognising the unique set of productivity levers that allow these places to succeed or perpetuate their decline. Devolution deals could address underlying population health and education issues which constrain economic growth.

At the level of neighbourhoods, we need to define overall minimum levels of prosperity and social capital to reverse the fortunes of left-behind places. This means building trust and learning from successful towns such as Bury, where regeneration has been supported by the council and Greater Manchester Combined Authority. GMCA is turning around the city region’s most economically deprived places through both targeted services and wider regeneration, such as in Radcliffe, as well as building more homes and increasing the amount of affordable housing. 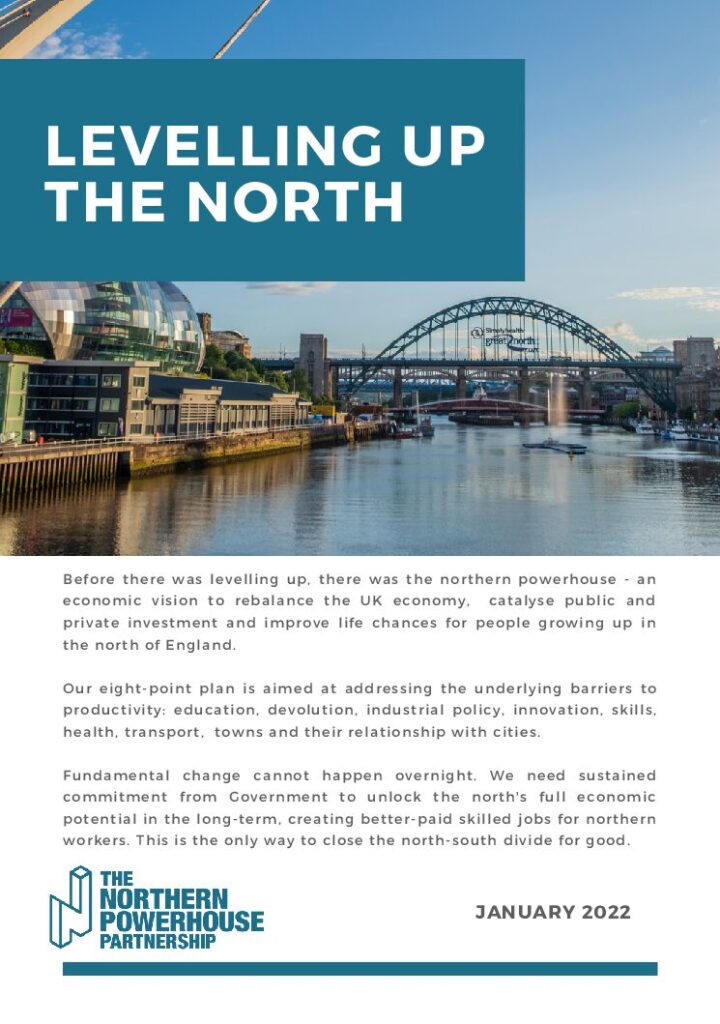