Our vice-chair Professor Juergen Maier CBE has joined forces with northern mayors Andy Burnham, Tracy Brabin, Dan Jarvis and Jamie Driscoll to state the case for a green Industrial Revolution in the north, with the aim of creating jobs, reducing energy bills and tackling climate change.

Gas prices have quadrupled in the past year, while the cost of renewables gets cheaper by the day.

Last week, we held a series of discussions with our sponsor EY, metro mayors, businesses and academics on how the north could lead the way to net zero.

In Liverpool, that means building and selling the UK’s renewable energy coast – HyNet and a tidal barrage in Merseyside. In Leeds, we talked about the importance of green skills and the Mayor’s plans to tackle this with a Green Jobs Taskforce. In Greater Manchester, we discussed the challenges and opportunities of retrofitting buildings to make them more energy efficient, as well as the new green technologies being developed by northern businesses.

Go big, go early
The best way to de-risk the net zero transition for investors is to go big. Over time, this will make technologies more cost effective.

We’re currently in a global race to develop these industries. The sooner we build up our innovation capabilities, grow the supply chain and create jobs in these sectors, the sooner we can become internationally competitive and start exporting to the rest of the world.

Net zero goes hand in hand with levelling up. According to analysis from IPPR North, more than 46,000 jobs could be created in the net zero transition by 2030 in the north alone. More than half the country’s renewable energy is produced here.

In Selby, Drax has converted a huge power station from coal to biomass, securing thousands of high-skilled jobs. They’re also investing millions into carbon capture and storage technology, which provides negative emissions by taking carbon dioxide out of the atmosphere.

In Hull, Siemens Gamesa is doubling the size of its factory where they make blades for wind turbines, creating 200 more jobs.

In Sheffield, investment in hydrogen and small modular reactors nuclear energy is translating into highly-skilled, well-paid jobs at Forgemasters.

Places like the Humber – which accounts for 40% of Britain’s total industrial emissions – are most at risk of a botched green transition, with thousands of jobs on the line should we pull the plug on investment.

Connecting the dots
We need a collaborative, co-ordinated approach to reach our net zero ambition, including:

Chris Skidmore, Conservative MP for Kingswood and Chair of the Net Zero Support Group, said: “Just as the North led the first Industrial Revolution, it is the North that will benefit the most from the ongoing Green Industrial revolution. Tens of thousands of new jobs have already been created across renewable industries that have found a strong reliable base and dedicated local workforce in our former coalfield and industrial communities.

“I established the Net Zero Support Group of Conservative MPs because I have always been struck how so many of the benefits of net zero – jobs, inward investment, new skills, creating warmer homes – are never even mentioned, yet it is households in the North that will benefit the most.

“Northern MPs and those Conservatives in Red Wall seats understand this, and many have joined the group to demonstrate their support for the green investment that is taking place in their seats.

“We need secure, homegrown energy supplies that are manufactured by British workers in the North. Local communities in the North are ahead of the game in knowing that their future lies in looking to the future, and not backwards to a fossil fuel powered past.”

Read the full statement below. 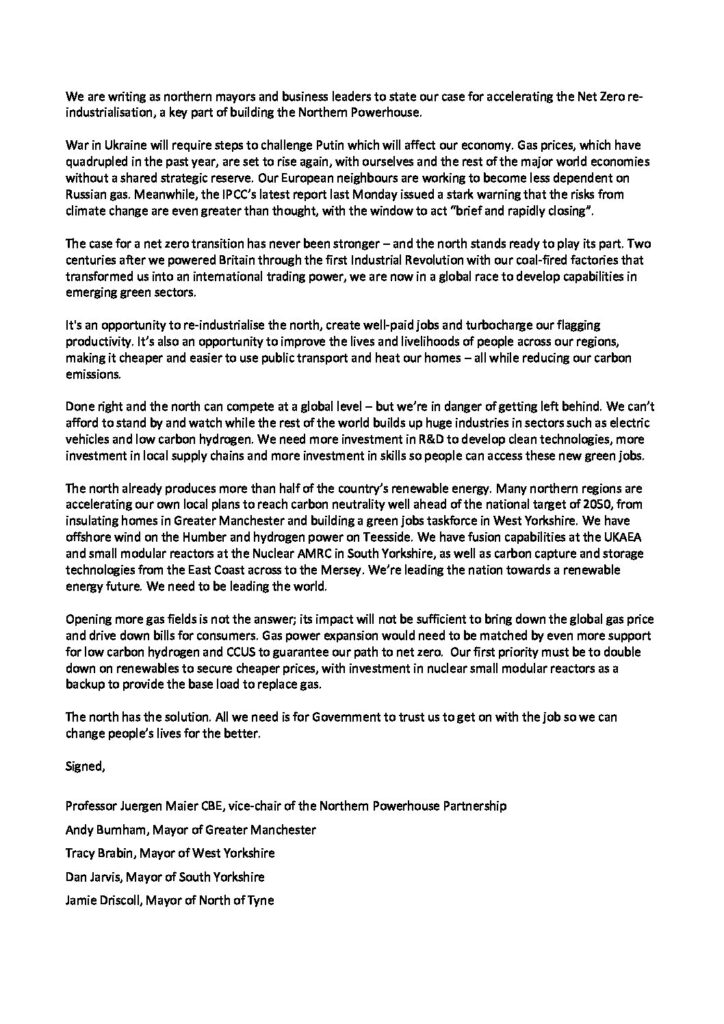